Generally speaking, there are two ways to remove earwax plugs, either by manual or mechanical extraction or by lysis. The two methods are often combined.

Lysis or at least the softening of earwax plugs has been practised for a very long time. As far back as the 1st century AD, the doctor Aulus Cornelius Celsus described one such technique in his book De Medicina.

Over the years, many ingredients have been tried, such as olive oil or paraffin, oxygenated water or bicarbonate of soda. These ingredients are still used to this day. Then, chemical medicine arrived with new substances such as docusate sodium.

Manual extraction has been conducted for longer perhaps, using curettage. Using a curette means the earwax plug can be scraped, particularly in the case of very dry plugs.

The irrigation method began in the 19th Century with the birth of specialist ENT medicine. An injection of warm water helps unstick the earwax plug, but it is easier if the plug has been softened using a specially adapted ear solution beforehand. 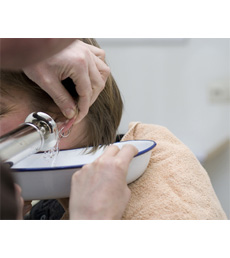