A-CERUMEN wets and then dissolves earwax plugs (dried and compacted earwax). Once the plug has been eliminated, wax which serves a protective and lubricating role can once again be secreted. A-CERUMEN dissolves plugs which are already present and prevents them from appearing by regulating the accumulation of wax in the canal.

1.  Surfactants attach onto the earwax plug.

3.  The earwax is dissolved. 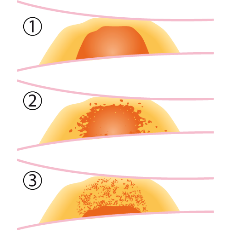